European tungsten prices have declined since the start of second quarter albeit at a slower pace than Chinese prices as deteriorating US-Sino trade relations, weak demand and oversupply weighed on global markets. Prices for ammonium paratungstate (APT) fell by 9.3pc between January and 11 July in Europe, compared with the Chinese market, which erased nearly a quarter of its value over the same period, Argus data show.

The European tungsten market was largely quiet over the second quarter, with many users consuming material from their long-term supply contracts, resulting in limited buying interest and weak spot demand.

Tungsten markets globally were squeezed from oversupply and lack of demand from the automotive, cemented carbide and special alloys industries, resulting in falling prices. The sharpest decline was noted in China, the world’s top producer.

And the risk of additional supply from the now-defunct Fanya Metal Exchange continues to linger on the market.

In response, many Chinese producers have agreed to cut production to relieve supply pressures on prices, while predictions for heavy rainfall could tighten supply in the latter half of the year.

This is not the first time the global tungsten market has faced a conglomeration of weak supply and demand pressures.

But this move resulted in a price recovery in the second half of 2016, a trend that could replay in 2019 as the impact of the latest production cuts stem price losses in the near term. 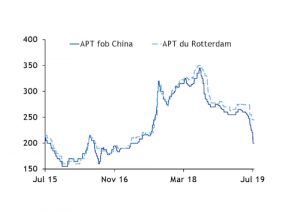