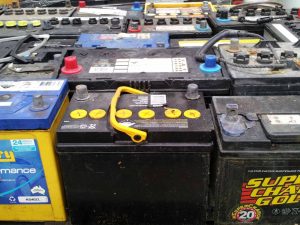 These are automotive batteries (Car, truck, motorbike).
The grid structure in both batteries is made from a Lead alloy. A pure Lead grid structure is not strong enough & therefore other metals like antimony, calcium, tin, and selenium in small quantities are alloyed for added strength and improved electrical properties.

Lead is a chemical element with atomic number 82 and symbol Pb. It is a heavy metal with a density exceeding that of most common materials; it is soft, malleable, and melts at a relatively low temperature. When freshly cut, it has a bluish-white tint; it tarnishes to a dull grey upon exposure to air.

Lead has several properties that make it useful: high density, low melting point, ductility, and relative inertness to oxidation. Combined with relative abundance and low cost, these factors resulted in the extensive use of lead in construction, plumbing, batteries, bullets and shot, weights, solders, pewters, fusible alloys, and radiation shielding.

A catalytic converter is an emissions control device that converts toxic gases and pollutants in exhaust gas to less toxic pollutants by catalyzing a redox reaction
Cat converters are made of precious metal such as platinum, palladium and rhodium.

Usually come out of machines and electronics, some items you can find them in are lawn mowers, washing machines, refrigerators and more. Electric motors usually have copper coils throughout the unit, it can be quite time consuming to remove these coils from the electrical motors.

Feel free to bring your electrical motors down to the WMR yard and we will be willing to take them off your hands.

Is a processed metal alloy with several different industrial uses, it is used to prevent rust and corrosion in steel via a process known as manganese phosphating. Many alloys containing manganese are used in steel production, glass making, and to make aluminium in soda cans thinner and stronger.

These are manly found within the mining industry.

Most car engines are made from aluminium alloys. Magnesium is also used for engine parts, most commonly alloyed with aluminium.

Turbines are a rotary mechanical device which extracts kinetic energy of some fluid such as water, steam, air or combustion gases.

A simple turbine is composed of a series of blades, most commonly made from steel. It allows the fluid to enter the turbine, pushing the blades. The blades then spin and eject the fluid.

The types of turbines are, wind, water, steam and gas turbines 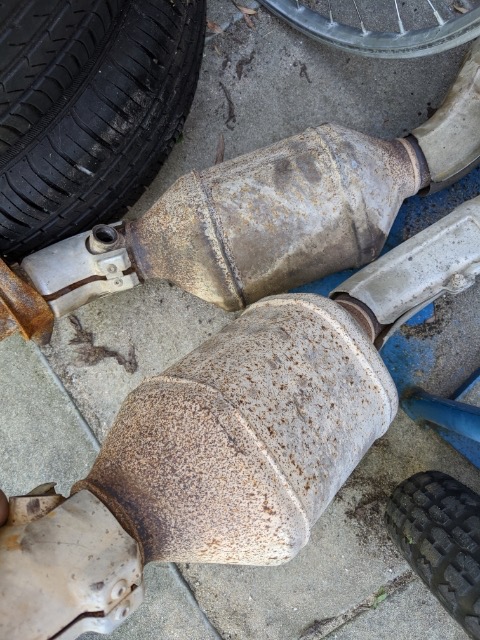